I LOVE mini things and I LOVE pancakes and waffles and this is all those together, plus a delish flavor combo, and it’s amazing!! I’m sure by now you have seen the trend of “cereal” being made with mini pancakes and waffles, and I have been wanting to make this for a while but decided to wait until after I finished school since it takes a while to flip all the little baby pancakes. But this is so fun and tasty, and definitely worth the patience and extra time! I couldn’t decide if I wanted to do pancakes or waffles, so I did BOTH!

I wanted to make my pancake and waffle cereal different, so I made them have fun flavors! I chose flavors that would be pretty and colorful, but also taste well together, and I believe I have succeeded. The pink pancakes and green matcha waffles looks so bright and cheerful, and the raspberries, mint, and matcha all go great together.

I was never a huge cereal fan when I was younger because I didn’t like how soggy the cereal got when milk was added, so if you are like me and want your waffles and pancakes to stay warm and slightly crispy, enjoy this recipe as a yogurt “cereal” bowl instead of adding milk! I tried it both ways, and I actually didn’t mind the waffles and pancakes with milk - just goes to show that your tastes can evolve haha! I do think I prefer them warm and crispy, but of course, it wouldn’t be cereal without milk so I had to at least try it.

For the pancakes, I first tried just adding small spoonfuls to the pan, but found it was hard to make them evenly round and consistent in size.

My attempt doing this with a spoon - definitely hard to get consistent shapes!

So I then tried the method of adding the batter to a plastic baggie, cutting a tiny hole by snipping off the corner, and piping dime-sized dollops of batter onto the pan. This took a few tries to get the hang of it, but was much easier and quick to do! I took a video of this “technique”, and show it below in the recipe steps. You can definitely make this recipe without this method and just have slightly larger mini pancakes, especially if you don’t mind if they aren’t all the same size. The waffles are MUCH easier to do - especially since you don’t have to flip each one! You just pour the batter over a single square, and space out the batter as much as you can so they don’t overlap (but if they do a bit, it’s ok, you can just cut the squares apart).

You could do either of these recipes as full-sized pancakes or waffles as well! Either recipe should work as either a waffle or pancake. The amounts used in this recipe would probably only make a small batch (maybe about 2-5 pancakes or waffles) since I didn’t need much batter for minis, so feel free to double if needed. I think the matcha mint recipe would be so good with blueberries added to it as well if you made a full-sized version. I will for sure be making these as full-sized waffles and pancakes in the future! These are vegan and nut-free and the matcha mint recipe has some spinach in it, so you’re eating veggies in your waffles but won’t even taste it.

1. Blend flour, berries, milk, vanilla, cinnamon, nutmeg, and almond extract together until the berries are all mixed in evenly.

2. Add the mixture to a bowl, then stir in the ground flax and baking powder.

3. Heat a large pan or skillet over low to medium heat on a stove.

4. Add the batter to a plastic baggie, and cut a tiny hole by snipping off the corner.

5. Pipe dime-sized dollops of batter onto the pan.

6. Cover (I think this helps them cook more evenly) and let them cook, then flip to cook the other side. Since they are small, it only takes a few minutes to cook each side, so keep an eye on them so they don’t burn.

7. Let cool, and enjoy on their own, with yogurt or milk, or in a bowl with the matcha mint waffle cereal!

1. Heat a waffle iron. Mix flax egg and set aside in the fridge.

2. Blend all wet ingredients besides the flax egg until smooth (if you are using fresh mint leaves, add to the blender)

3. Mix the dry ingredients in a mixing bowl.

5. Lightly oil the waffle iron and pour the batter over single squares, leaving space between each square to minimize overlap. Cook thoroughly - they should still be green but fully cooked and starting to get a bit golden brown on the edges.

6. Let cool and enjoy on their own, with yogurt or milk, or with the raspberry pancake cereal!

A spoonful of waffle! 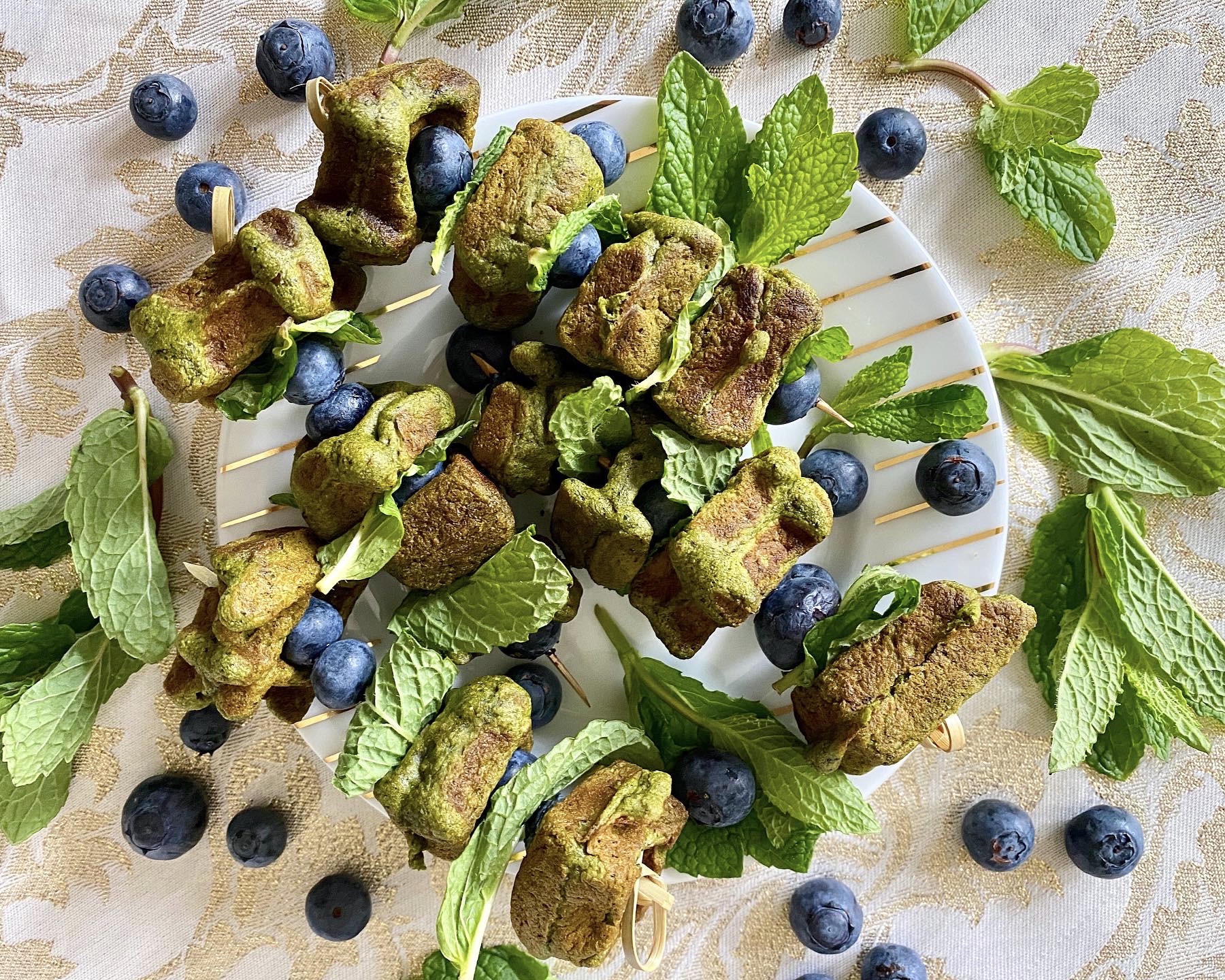 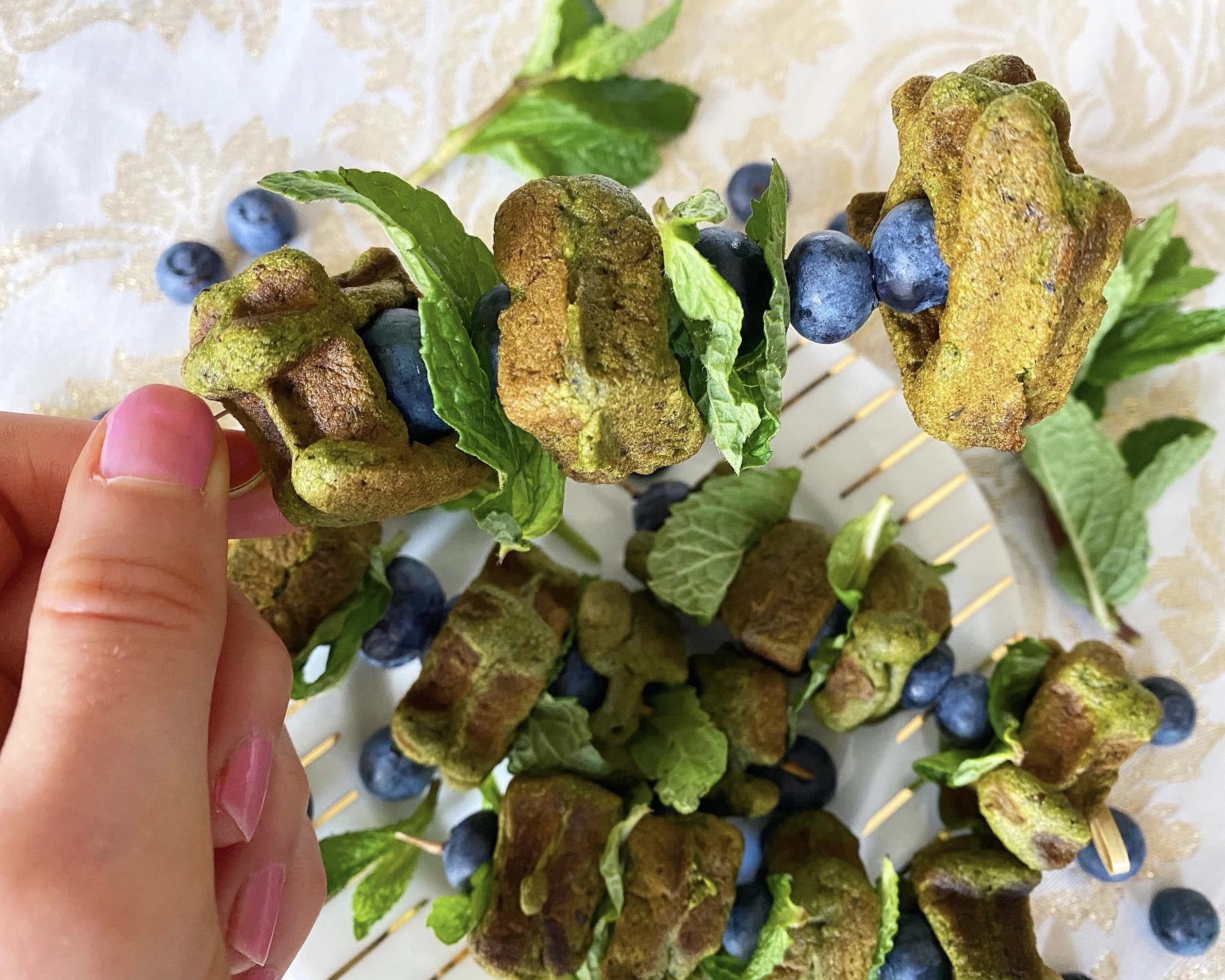 If you have extra waffle bites, you can skewer them with mint and blueberries for another delicious and fast breakfast!